Jack Kerouac loved his flannel shirts. Loved them so much, he wore them in the hot Florida summers, taking three cold showers a day trying to cool off. Only to put another flannel shirt back on so he could complain about the heat again.

That fact popped into my head when I showed up in Lowell, Massachusetts for this year’s Lowell Celebrates Kerouac festival. I was greeted at the kickoff event by a small army of plaid flannel shirt-wearing Kerouac fans, and knew I was in the right place.

I had been invited to participate in the Lowell Celebrates Kerouac festival, in my capacity as a board member as well as a former writer-in-residence. I was going to speak about the Orlando Kerouac House and the residency program, give a response to an academic lecture, judge a high school poetry contest, and read at an open mic. 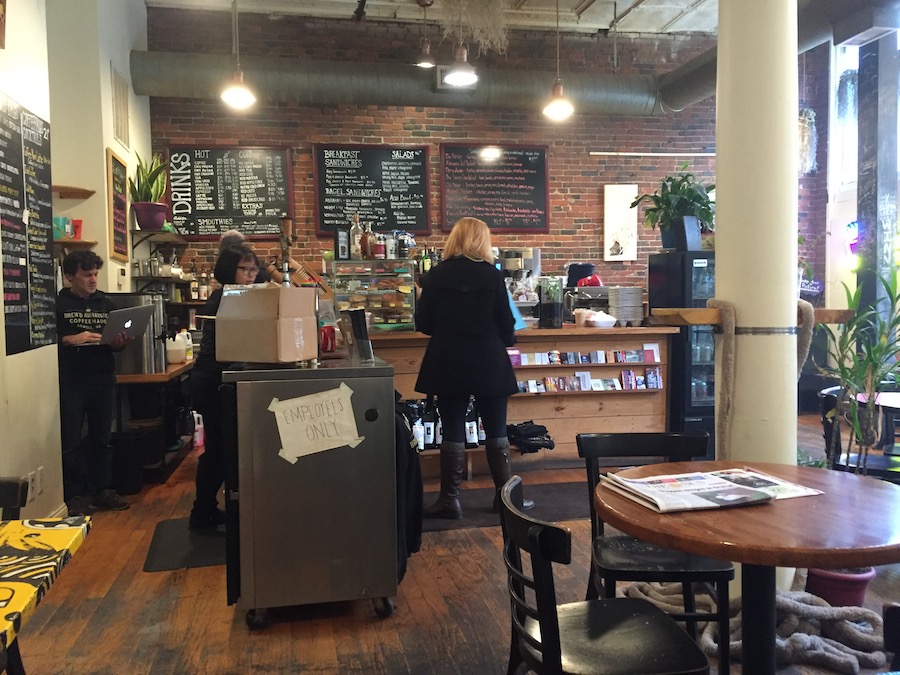 I arrive in Lowell around 11 am, and check into the hotel, but my room isn’t ready yet. I find my way down to a coffee shop in downtown Lowell, Brew’d Awakenings, which becomes my local favorite.

They ask me if I want to join their coffee club, but I stupidly decline. Stupidly, because I went there enough times over the weekend that, had I joined, I would probably be a part-owner by now.

That evening, I hit Cappy’s Copper Kettle in downtown Lowell. The kickoff event is a concert and poetry reading, with a few local musicians playing Kerouac- and Beat-inspired music. Some people also read poems and celebrate friends and loved ones who passed during the last year.

The buzz around me is that Kerouac compatriot, David Amram, is going to make an appearance that evening. He walks in around 8:30 and is greeted like an old friend, which he is. David has been here many times, and they know him well.

He takes the stage and performs a few numbers, including some he has written himself, or re-arranged for his own use like Phil Ochs’ “When I’m gone.”

I’m told I’ll have a chance to read something, and it would be great if I had any poetry.

That’s a laugh. I don’t do poetry. I’m not a poet. I’ve written one poem in my entire life, and it was about how much I don’t like writing poetry. Also, it had the word “motherf*cker” in it, and I’m a little worried about pulling that one out in this crowd.

Luckily, I had something that I felt would capture the spirit of the weekend, a piece about how nothing good ever happened before 9:00 PM.

It’s my turn to read, and as I do, there’s music playing behind me. I turn, and David Amram is accompanying me at the keyboard.

Me! A kid from Indiana who emigrated to Florida. A humor writer is reading to a bunch of Kerouac scholars and fans, with Kerouac’s good friend and musical accompanist playing behind me.

Now I have two things in common with Jack Kerouac: I’ve lived in the same house, and I’ve performed with David Amram.

“As great as midnight is, the best stuff happens much later. ‘We talked until two, And then she said, “It’s time for bed,”‘ sang The Beatles in Norwegian Wood.

“The Dropkick Murphys said in Famous For Nothing, ‘The barrel fire’s fading, My pals are disappearing, another night is passing but I won’t go, It’s 2AM at townie, and things are going my way.’

“Mötörhead sang in Fast and Loose—” and then I turn to David. “Do you know any Mötörhead?”

He did not, although that got a big laugh.

Over the next few days, people tell me, “I liked your poem on Thursday.” It was a humor column, but I don’t want to correct anyone. Next time, I’ll squeeze in the margins and call it a poem.

When we’re finished, I drive David back to his hotel — turns out we’re staying in the same place — and I also take Charlie Shuttleworth, a high school English teacher from California who teaches a class on Kerouac. His school is bringing David out as a week-long artist-in-residence, and they have a lot to talk about.

It’s off to Lowell High School — Jack’s high school — where I’m to judge a high school poetry competition. I’m a little iffy about this one, partly because I’ve only judged poetry twice before. And I remember the poetry my friends wrote in high school. I have some preconceived notions — none of them favorable — about what I’m going to hear.

Those notions are smashed halfway through the first poem, and I’m blown away by what I hear from kids who are younger than my own kids. These are not the lovestruck ramblings of hormonal teenagers, these are deep and insightful looks at how young adults are facing problems that I’ve never had to face.

We’ve broken these kids as a society. How they find the strength to deal with everything we’ve piled on this generation while they’re going to school is amazing. And I love these 24 poets for expressing themselves and their fears with passion and hope, and doing it in one of the scariest activities people do: speaking in public.

I don’t know how I can judge that.

So we judges have a tough time picking our top 10 out of the 23 entrants, but we manage.

The next round, the final 10 are on stage, and they come up one by one, to share another poem. The auditorium is filled with their friends, who clap and cheer when each poet takes their turn.

Now our job is harder. The judges adjourn to a classroom and choose the top three winners — first and second place are separated by half a point — and they receive congratulations from the crowd, and a cash prize from the Lowell Celebrates Kerouac foundation.

After lunch, I head to the Pollard Library for my talk about my time as the Spring 2016 writer-in-residence at the Kerouac House. I share my story about how I first heard about the house, how and why I applied, and what I did during my time there.

I talk about the history of the house, and what Jack accomplished while he was there. I talk about how we’re trying to protect his legacy while supporting the writing community at large. And I tell them what it takes to become a writer-in-residence.

Afterward, Charlie Shuttleworth and I grab dinner and talk teaching Jack, and then we run over to David Amram’s concert (which we ended up missing most of). We head back to the hotel, after dropping off a woman who came all the way from the UK to be a part of the celebration. We take her to her Airbnb and then head back to the hotel, exhausted after a long day of traipsing around downtown, meeting people, talking about Jack, and sharing our own thoughts and stories.

Saturday was an eventful day and I’ll write about that in a follow-up post.