This article recently appeared in the College Park Community Paper, and was written by Kerouac Project president, Janna Benge.

If you enter the historic Kerouac House in College Park you will be greeted by a bust of Jack Kerouac himself. He sits on a shelf staring at the front door, and he is there thanks to the generosity and talent of Barbara Fischler, who lives two doors from the house where the beat writer lived and wrote in 1957-58.

Barbara moved to College Park ten years ago and one of the first events she remembers in the neighborhood was the unveiling of the plaque designating The Kerouac House a National Historic Site. 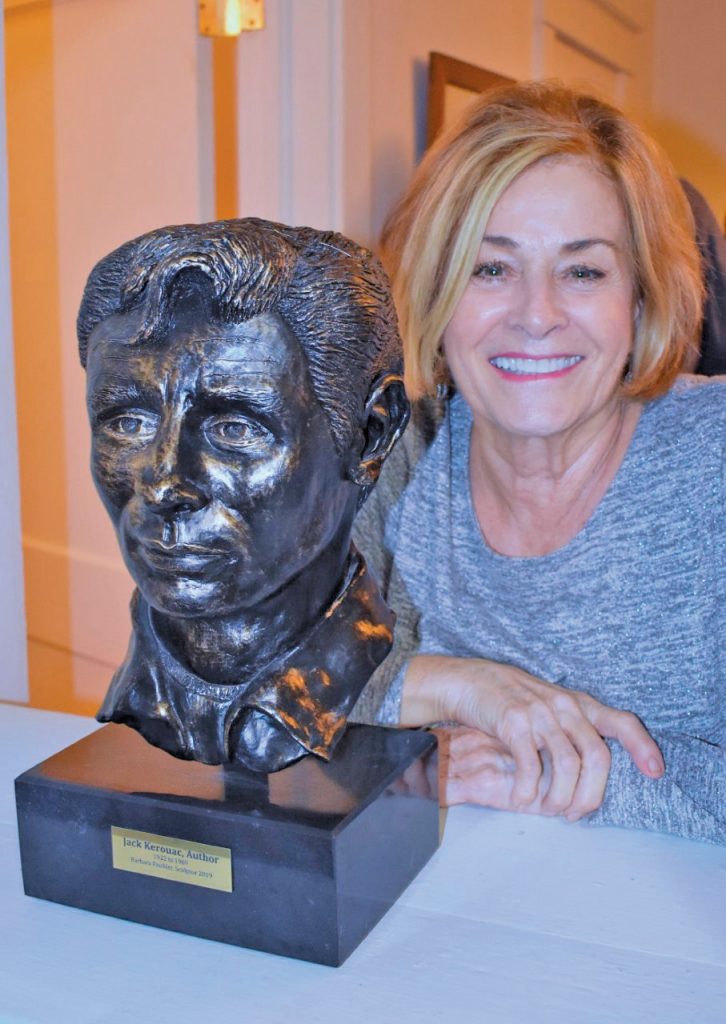 The Kerouac House is used as a community hub for local literary activities and home to four writing residents each year who earn a free stay in the house on the strength of their writing. One of those residents, poet Ciara Shuttleworth, struck up a friendship with Barbara. At the end of her residency, before leaving Orlando, Ciara gave Barbara a card on which she had painted a portrait of Jack Kerouac. A year later, as she searched for a muse for her sculpting class at Crealde School of Art, Barbara glanced at the card on her office shelf and an idea was born. Why not make a bust of Jack Kerouac? Many hours later—she stopped counting early on in the project—Barbara completed the bust and donated it to the Kerouac Project of Orlando.

Each writer who stays at the House enjoys a “welcome” potluck dinner at the start of their three-month residency and gives a public “farewell reading” for their work at the end. Jack Kerouac’s bronze bust of was unveiled to a crowd of supporters following a farewell reading by departing resident Chelsey Clammer on Saturday night, November 16, 2019. Barbara’s sculpting teacher and mentor David Lee Combie was on hand to help with the unveiling.

Kerouac Project President Janna Benge said, “We are so delighted to have this rendition of Jack which Barbara has so generously gifted to us. It feels perfect to have him in the living room presiding over all the literary readings and writing workshops that go on here. He looks right at home.”

If you would like more information on what goes on at the Kerouac House, and/or to have a tour of the place, you can reach out to the Kerouac Project through their website KerouacProject.org. Jack will be there to welcome you was you walk through the front door.