From time to time, different Kerouac House alumni will write in and tell us what they’ve been up to, or how their residency helped prepare them for the writing life. This month, we hear from Fall 2006 resident, Christopher Watkins.

The Fine Excess of 1418 ½ Clouser Avenue, and Everything After

The poems typed under the sloping roof of the Kerouac House became my first volume of poetry. The process of bringing them down from the walls where I’d taped them and watching them become “Short Houses With Wide Porches” remains one of the great memories of my life. The book was published by Shady Lane Press, a beautiful but short-lived imprint under the Kerouac House umbrella, and while the press is no more, the volume lives on as a defining moment in my writing life. I was still mid-stream in an MFA program at the time, but I had become a published author of a book of poems. It was glorious.

The poets Baron Wormser, Jeffrey Harrison, and Ted Deppe graciously provided testimonials for the back cover. Ted’s quote, in particular, does a lovely job of describing what the experience of writing under that roof was like for me:

“Send a blues traveler down to live in Jack Kerouac’s house in Florida, let him compose on his ‘28 Underwood and tack dithyrambic hymns to the wall while Monk and Parker hold court, invite Bessie Smith, Han-Shan, and William Matthews in at the end of the day, imagine discourse-sparks and music-flares rising into the tinderbox night, and then imagine that those mad laments and ecstatic songs are coming from one voice, and that voice is talking to you quietly and thoughtfully, and all that superabundant life has been channeled into the fine excess of his music.” 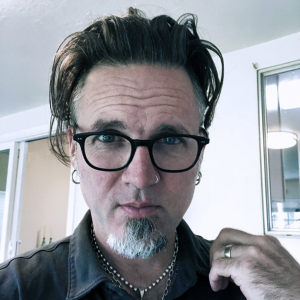 In the ensuing years since departing College Park’s no-see-um-riddled nights and the comforting arms of Great Uncle Oak, I have become something I never thought possible—a professional writer. Every morning I wake up, look at my LinkedIn profile, and marvel at the fact that there, in that box where [JOB TITLE] goes, are the words “Senior,” “Creative” and “Writer”—in exactly that order. That I get health insurance, and can support my missus and daughter accordingly, through the work of these typing fingers, is the great mystery and miracle of my life.

I have simultaneously returned with some tenacity to the “fine excess” of my music. I wasn’t sure I would, during those days and nights writing and sleeping under Kerouac’s heavy-browed gaze and hypnotic legacy. I thought I’d given it up, and given up. But that hasn’t proven to be the case. In the years since, I have, in fact, released five more Preacher Boy albums (the name I have recorded under since my debut in 1995), the latest being 2018’s “The Rumble Strip.” The lyric book that accompanied the release of “The Rumble Strip” featured a book-length poem entitled “I-80 Blues: 96 Choruses”—very much a nod to the 242 choruses of Kerouac’s “Mexico City Blues,” and very much a product of the same in-the-moment spontaneous prosody approach.

As the preface to “I-80 Blues” hopefully makes clear, the poem emerges from what was, for me, a profoundly stirring and dramatic journey:

I have also continued to write poetry apart from music, and many of my pieces have been published by lovely journals such as The Massachusetts Review, Hayden’s Ferry Review, Redivider, Euphony, Slipstream, The Southampton Review, Red Rock Review, and more. Most recently, my poem “ Emigrant Song” was published by Harpur Palate, and subsequently nominated for a Pushcart Prize.

All in all, I write on, and forever after, I will always remain grateful for my time at 1418 ½ Clouser Avenue.