From time to time, different Kerouac House alumni will write in and tell us what they’ve been up to, or how their residency helped prepare them for the writing life. This month, we hear from Spring 2018 resident, Laura Lee Bahr.

Hands in the stream: Bits of the scroll from my time at the Kerouac house

A dream I had at the Kerouac House:


I was reminiscing about my time at the Kerouac House, and trying to remember that beautiful feeling of the hardwood floors on my feet when I would wake and get out of bed, rushing to my computer to write. And I wished, in the dream, that I was there still. And then I woke up and my wish had come true: I had two months left.

The time I spent at the Kerouac House (I was the Spring resident in 2018) I fell head over heels in love with the writing process. I wrote almost constantly while I was there. I wrote like I’d never have the opportunity to do it again. I wrote until my eyes hurt, my brain hurt, my heart hurt, but I kept going. Maybe it was Kerouac’s spirit — how he taped together those scrolls of paper and wrote without ceasing. I followed a kind of similar process. I just used a google doc that didn’t end. I wrote a novel, but I also wrote stream of consciousness journal type entries as if I were just racing after every thought and trying to catch it before I lost it to the ocean.

So, here, in honor of that time — a life-giving life-changing time — I decided to go back to that stream and draw up small handfuls of prose, almost at random. There is a letter I wrote, a poem, a marveling that I actually finished the book I was working on, but mostly it is just me telling myself to look around and remember. Diving into these pages has been like getting to wake up again with a wish come true: 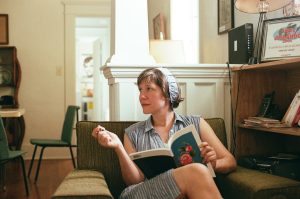 …I mean it was nuts. I tried to sleep in Jack’s room. Maybe it’s the picture glowering across the bed — it’s a charcoal type ink drawing of his face that looks as if he may be slightly — I don’t know — not trustworthy in some way. His eyes are all black and the expression while it isn’t malevolent, it is very intense. This may be a better napping room rather than sleep sleeping room, even though I specifically was asking for inspiration, I couldn’t make it for more than an hour and a half last night. My mind was awake in that almost meditative way, like yoga nidra or something. I think I slept but I can’t be sure…

It will get warm. Right?

(It’s 62 degrees in here, btw so it’s not actually freezing. It’s just me and poor circulation and feeling depressed and like I can’t really move and I can’t cant’ can’t bear to turn on the heat.)

4/12/18
Before I left for my residency, I had been teaching a “Horror and Culture in Literature,” class. My brilliant students sent me letters. One of the students favorite stories was Stephen King’s “Secret Window, Secret Garden.” So, here was a letter I wrote to them in response:

“You stole my story,” said a funny looking lady with the fashion sense of a five year old and a parasol.

Stephanie Queen’s latest story, “Conspicuous Compost, Obvious Door,” was turning out to be a real cooker. But when a woman showed up at the Dead-Beat Author’s home where she was writing her latest bestseller, she had to admit, she was feeling the heat.

“Fair is Fair, and the students of the Horror in Culture in Literature class will know just what happens to story-stealers,” the woman said with a far too big smile. It was very creepy.

“Who are you and how could you accuse me of such a thing!” Stephanie started, but when the lady handed her pages with her writing, she had to admit — there were some startling similarities…

When Lobster Claus told all the fine diners he would pick who was naughty first for his Human Surf and Turf, everyone got very self-righteous about how much they’d recycled (were vegan, not even pescatarian) but he just laughed at them all with the sound they say is a lobster screaming when boiled (or just the steam escaping his shell).

The Primordial Evil Crustacean who dressed as a popular holiday personality was indeed too close for comfort to the scene she had just written in a fit of creative flow:

“He He He!!” chortled Lobster Clause in his red hat, with his lobster trap sleigh drawn by crawfish. “I see you when you’re sleeping! I know when you’re awake! I know who’s been bad or good, and both will be served with steak!”

“Look,” Stephanie Queen said to the lady wearing a cat t-shirt and ballerina skirt over jeans (which was not even in style in kindergarten) and tell-tale pages, “I don’t know where you got this idea for a story but I assure you, I have never even heard of such a thing as a Horror and Culture in Literature class. What sort of school would allow such a thing?”

“He He He!” chortled the lady. “Ho Ho Ho! Very funny, Stephanie Queen! I think you know exactly what sort of school, and what sort of students would take such a course… and what sort of teacher you might get to replace you while you traveled here to steal my story! Just wait until they find out what you’ve done! Surf and turf will be too good for you!”

Why did those names fill her with such…terror?

So I just started writing it — and then there was a power outage, which didn’t affect anything as far as I am concerned because I just read through it and thought about how I could read by flashlight and how much power I have left.

To walk this world with an open heart
and a clear mind is the greatest act of courage.
But oh — how to reconcile head and heart and world and not die of despair?

I will sink, then, down, with a tether to heaven.
I will go under the wave to quiet below and wait and when it is time, float up.
I will live in my weather, without complaint — but know when to stay indoors and when to
Lose layers.
Melancholy is a luxury, ornate and ornamental, like the child’s bike bell in the Beach Boys song “You still believe in me,”
“I want to cry” with the cry held out, harmonized, refrained.
I can make it — think it a fine wine, that I can experience slowly and know the strangeness of each flavor and know the cup is still one of joy, overflowing.
One could drown — I’ve almost drowned — but I still breathe…

I got 24 more days in this amazing home to call it mine. A lifetime, really! (Well, a butterfly lifetime)
Things I have already learned:

[REDACTED]
[REDACTED]
[REDACTED]
I actually really kinda like Florida. I may want to watch Miami Vice. 🙂
My fear and fantasy are bedfellows. I am not going to banish any part of me, just something to know that both of them aren’t necessarily the people I want talking in my ears as I sleep, but better to let them pass in the sky than take them to heart.

5/3/18
I think the letters type faster in a new doc. Workers are SCREAMING out the window!
But, I woke up at 7:15 and slept through the hammering from 10 to 12 after writing for 10 hours yesterday.

Bug has just bitten me.
I’m gonna go put on some calamine lotion, swill some more coffee, and write this scene.

Each resident has their own challenge of their time, mine was that a giant house was being built right next door. I tuned most of it out by playing loud Tibetan bowl sounds and wearing earplugs, and my thoughts are REALLY LOUD.

5/10/18
I know it feels like it is all going by so fast.
Guess how many days you have here on this cloud if you want to try and make shapes of it later, tho. 🙂

I’ve missed some days…
But most of them. It feels like dying, really — like everything is maybe a practice in what it is to die. You want to stay, you make a life, you plant it all and then…
What a world, right?

5/14/15
If there is anything better than waking up to rain in the Kerouac House with nothing really to do but how you want to do it, I don’t know what it is.

…
I have one last flash fiction piece to write, which maybe should be a blessing:
Remember when you slept with eyes on fire and neck twisted and remember how you cried and cried and how you didn’t know how it could come or if it would come if ever and all the mess of it and how you had to clean it and work it and how your eyes your feet your legs your fingers your wrists you arm with a sharp shooting pain
The cold when you were so cold you put a washcloth in a hat to cover your nose
The hot when you could barely breathe
But most of all seeing things you’d thought and all the blame and hurt and anger you had for others was a nest inside your own medulla oblongata and how you took their teeth and clamped them and milked their poison from them and from this you made a powerful medicine
From this you made something that would cure the cancer with an incantation.
Remember how you were shot in the back in the parking lot of a dark strip mall as you walked to the car — and cried no no no no— and tried to not leave your body because you had so much left as you to hold on to but pop pop pop pop pop all through your back and you could not stay in your body any longer and out went your spirit but then you
Got to be born again and the next morning better and every place you had been shot now a place where more light came through you shining light from not just your head now and heart but every place where a random man put those holes you now bless the world.
Remember how you stared at whorls in the ceiling and saw your death
Remember how your throat held tight.
Remember how you hated and how you feared and how you loved and how you called to you
Remember how you felt the floor beneath you in a dream
Remember what it is to have time and watch it day by day pass as it does, it always does, always that marvel.
Look and see. Is this a poem?
It is a blessing.

(Be sure to check out her book Haunt on Amazon.