Home Is Where The Writing Is

From time to time, different Kerouac House alumni will write in and tell us what they’ve been up to, or how their residency helped prepare them for the writing life. This month, we hear from Fall 2019 resident, Chelsey Clammer.

Writing has become my home. The blank page being the space I return to again and again—the place where I’m always welcomed to just be myself and be fully present as I meander around worded memories and don’t hold back who I am or have been. Before I discovered the blank page as my home, the concept of “home” didn’t really mean much to me. Growing up, my family moved around a lot, following my father’s career as he climbed up the corporate ladder. And so I don’t have a childhood home to return to—I never have.

Home can mean a lot of things. Home is where we put our bodies—a “series of interiors,” as Rebecca Solnit describes. Home is safety. A staple of our lives. A consistent something that will always be there.

We hold our homes inside us, too. Our bodies as storage units of memories. 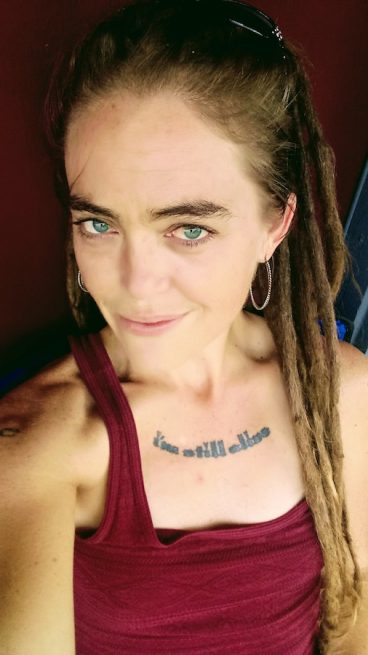 With a childhood full of shifting homes every three or four years, this concept of trying to find a “home” eventually led me to my body. That is, when I was in my early twenties and traveling around a lot to visit folks, I was sleeping on a friend’s couch one night when I realized that if I could feel at home in myself—my body—I could feel at home anywhere in the world.

I started writing for reals then. I had been keeping a diary and writing the first couple of chapters of many forever-incomplete novels that were really memoirs but with the names changed, but at that moment I knew I had a thing that I really wanted to explore and discover through my love of words. Scrawling out letters and sentences and paragraphs in my notebook, I used up so much ink to write about my body, my home. My first book—the aptly titled BodyHome—came from that writing. I wrote about my body as my home, and four years later, my writing would bring me to a different home—the Jack Kerouac house.

But first, in the 37 years of my existence, I have moved from:

Laramie, Wyoming, to Elizabeth, Colorado, to Tracy, California, to Round Rock, Texas, to Chicago to Minneapolis to Austin to Denver, then back to Minneapolis and then back to Austin and unfortunately up to Waco and then back to Austin, a stint in Orlando, and then to a tiny town in Texas you’ve never heard of that is on the outskirts of two other tiny towns in Texas you’ve never heard of, and finally up in Cripple Creek, Colorado. (Now you’ll have that song by The Band stuck in your head for the rest of the day. You’re welcome.)

It was my third day in my new, temporary home in Orlando and hurricane Dorian had thankfully shifted positions, so Orlando didn’t get water-massacred, but we did get a heavy, relentless downpour. Being a lover of outdoor spaces, I sat on that front porch of the Kerouac House, the rain streaming down around me but the porch’s ceiling keeping me dry, I felt this sense of connection. Of safety. Protection, even.

Notebook in front of me, I wrote about I don’t know what, but that sense of writing and being somewhere that felt like home was a “rooting” moment of sorts for me. Here was this space that I knew I would be calling my home for the next three months—knowing that and knowing that I’d have the physical and mental space to just sit and be a writer for three months made me feel like I really was at home. Just three days in and I felt safe in my new home. Like I was meant to be there. I felt welcomed by the members of the board and the directors and the neighbors and everyone else I had met so far. And to know that all I had to do in those three months was to just be me—a writer—well, I’ve never felt such a strong sense of belonging before. Such a strong sense of home.

For three months, the Kerouac House fostered my writing, helped me to continue to feel at home on the page. And, in turn, instantly made me feel at home in the house.

I’ve lived in so many homes—too many, almost—and have written so many pages about discovering home and my humanness. But it’s the Kerouac House that will always feel like the home where I was supposed to be. It’s hard to create that synergy in life. But give a writer a place to write, some time to discover her words, and a new sense of completeness, synchronicity will no doubt occur.

It’s been a year since I’ve been at my Kerouac “home.” But I can still see the Spanish moss hanging from the centuries-old oak tree out front. Can still hear the cabinet doors shake with each footstep I place as I traverse the dining room. Can still picture that hilariously miniature microwave and all the knickknacks accumulated in the backroom Kerouac shrine. I can still sense that safe feeling as I sat outside on the porch, writing in the verging-on-hurricane rain, my notebook in front of me, and me just being me—a writer discovering her sense of home, and ultimately, her sense of self.

Chelsey Clammer was the Fall 2019 writer-in-residence. She is the author of the award-winning essay collection, Circadian (Red Hen Press, 2017) and BodyHome (Hopewell Publications, 2015). Her next collection of essays, Human Heartbeat Detected is forthcoming from Red Hen Press. Chelsey received an MFA in Creative Writing from Rainier Writing Workshop, and an MA in Women’s Studies from Loyola University Chicago. You can learn more at ChelseyClammer.com.