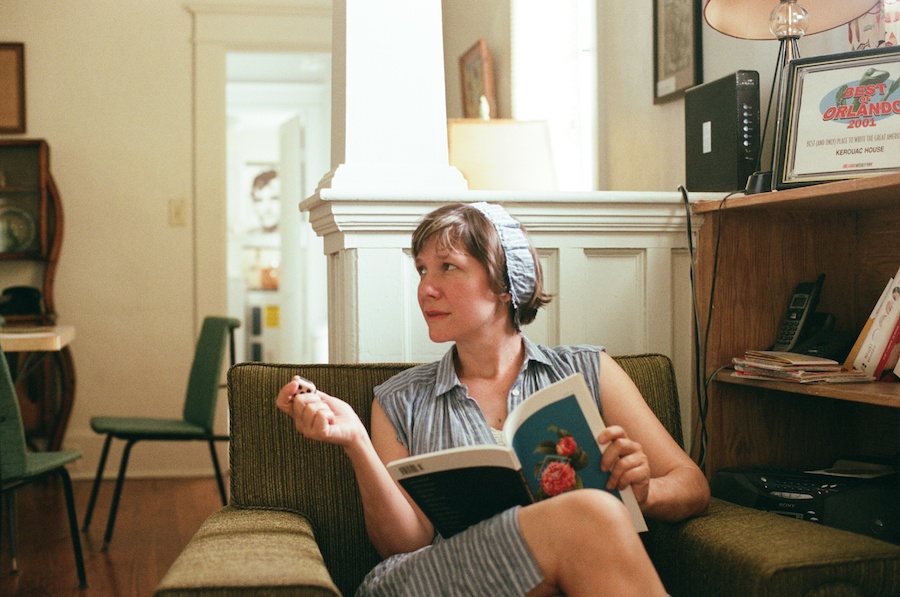 From time to time, different Kerouac House alumni will write in and share some of their work with us. This month, we hear from Spring 2018 writer-in-residence, Laura Lee Bahr.

Remembering writers you haven’t read and

“‘There were women, they were there, I knew them, their families put them in institutions, they were given electric shock. In the 50’s, if you were male, you could be a rebel, but if you were female, your families had you locked up…I knew them. Someday someone will write about them.’”

(Stephen Scobie, quoting Gregory Corso, who was responding to question why there were so few women on the program celebrating Beat writers, 1994)*

The blessed sense of sheer fortune that I had of being a writer in residence in the Kerouac House—I still dream of my feet on those floors, and recall on the edge of waking what it was to open my eyes there—was tethered to a vague sense of obligation to Kerouac’s productivity. I felt I just had to write as much as I could as fast as I could—true to my own voice and whatever being there could inspire in terms of my own feverish pitch, tone, and volume.

But as I stayed there, I had a creeping sense of his shuffling ghost—not haunting the place but haunting me with his words, his regrets, and his horrors, from his DTs in Big Sur to the will-never-leave-me image of his father crying—The Vanity of Duluoz—as he flushed a nest of baby mice he had found in the apartment down the toilet. And as he was the mascot of my residency, and as I was (and am) a woman who believes spirits, ghosts, and the curative power of the word, I wanted to find some ritual of release for him from the traps of his time, a lack of vision, a tone-deafness to the voices of the women around him.

Which he knew: “The truth of the matter is we don’t understand our women; we blame them and it’s all our fault.” That quote is in the introduction of a book by Brenda Knight I found in the bookshelf of the Kerouac House calledWomen of the Beat Generation.

I took the book to bed with me. I woke up in the morning with it. I spent weeks with it. It got under my skin and left fingermarks from the inside of female writers whose words I had never seen, even in dreams.

Why had I never heard of them before? Because back then…blah blah blah… women’s rights and they didn’t have it so maybe…blah blah…now it’s fine and everyone knows that women were great writers back then, too.

Or maybe not. Maybe we don’t all know novelist Joyce Johnson (whose first novel was published when she was only 26), her books or how it felt to her all these years later to see that her face was deleted from a photo of Jack Kerouac (her lover at the time, 14 years her senior) that GAP used in their ads.

Maybe, like me, most people had never heard of writer Elsie Cowen, Ginsburg’s lover (who by all accounts nearly worshiped him) or her poems or her time spent in mental institutions, or how she threw herself out of a closed and locked window to her death in her parents New York apartment.

Maybe, like me, no one had heard of the nun turned Beat poet, Mary Norbert Kӧrte, who:

…ran away in everybody’s dreams

running running into the lines

running with her arms out wide

into the bright   flapping   dark

Or the haunted ballads of Helen Adam:

Rash is the man when the black banner blow

When I read the repeated-in-all-caps chorus of Diane di Prima’s Rant:

THE ONLY WAR THAT MATTERS IS THE WAR AGAINST

I felt the place in my head where I thought I knew what this world was totter and shake:

There is no way out of the spiritual battle

There is no way you can avoid taking sides

There is no way you can not have a poetics

no matter what you do: plumber, baker, teacher

There is no way out of the spiritual battle

The war is a war against the imagination

and it is bitter as death.

And lo! It still shakes me, like an after-shock in my old home state of CA, to think how much of my mind and world-view is occupied by hostile forces.

Even all these years later after my residency, I find in the stories of these women still the call to yes—

into the bright flapping dark

And in speaking their words aloud, again, I find a harmony with my voice,

And in claiming their words and stories from the past, a way to reimagine what is possible for the future.

The Beat generation reverberates into NOW with a call to find yourself apart.

In a time when women, like men, were rejecting the suffocation of conformity—

some survived it, and some didn’t.

And some may be remembered, and most aren’t.

But women were there—the brave ones, the brilliant ones, the mad ones—writers, poets, lovers, artists.

They were there.
And here we are:
Our bodies and brains still a hallowed and contested space.
Our words a ritual of release that souls may find peace.</p

*All quotations and poems are sourced from the most excellent Women of the Beat Generation: The Writers, Artists and Muses at the heart of a Revolution by Brenda Knight. Which you do not need to be in the Kerouac House to find. You can buy it or your local library can get it for you.