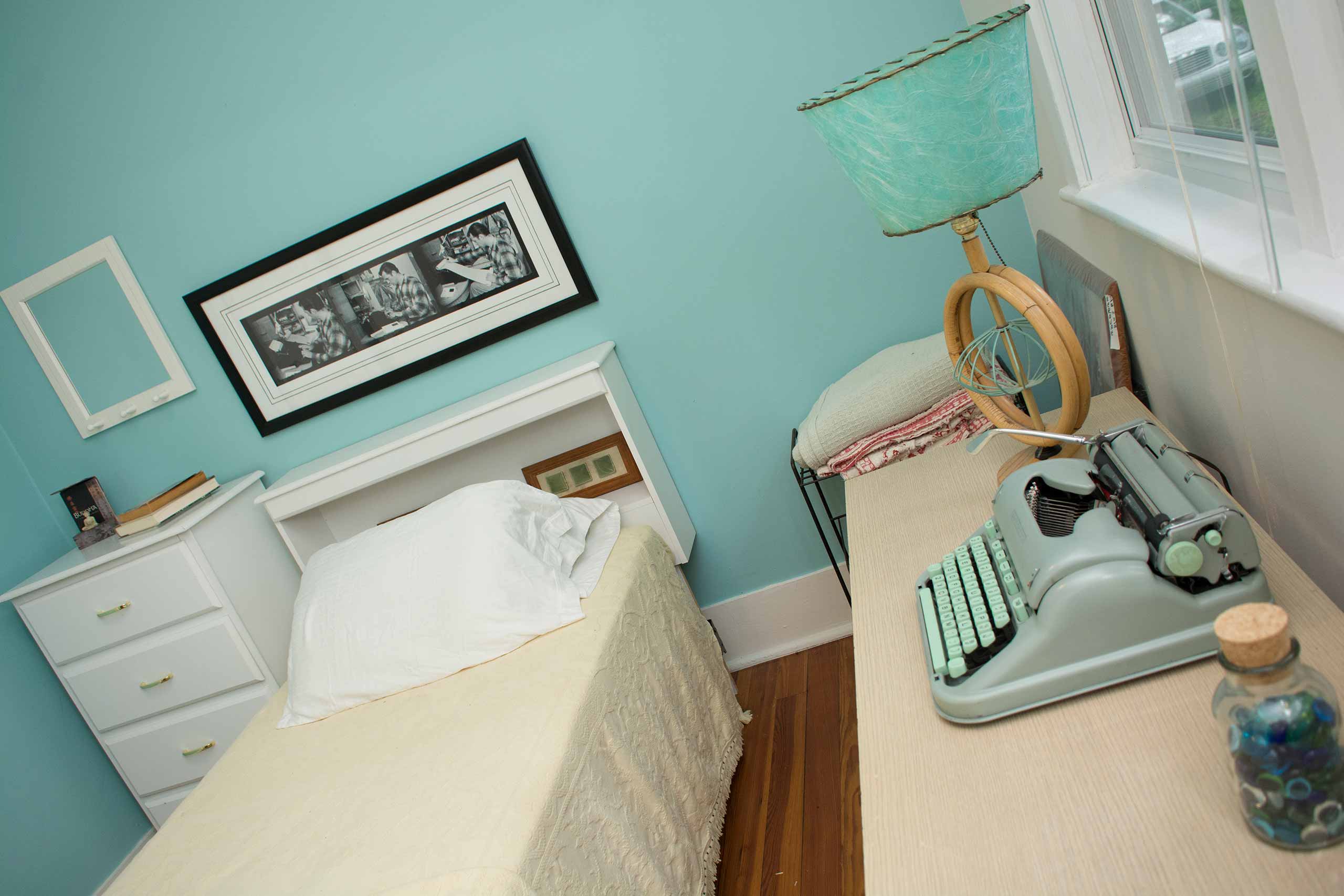 It was part of the lore of College Park, a cozy northwest Orlando neighborhood, that Jack Kerouac lived in the area for a short time in 1957–58 when his classic work On The Road was published to much acclaim. It was also the place where he typed the original manuscript of his sequel, Dharma Bums. Few people knew exactly where in College Park he lived, and nobody seemed to be aware of the historical significance of such a place. In fact, none of Kerouac’s biographers had even mentioned the house.

In 1996, when Bob Kealing, a reporter with the Orlando area NBC television affiliate and a freelance writer, learned Jack Kerouac had lived in the area he began investigating. He eventually learned from John Sampas, Jack Kerouac’s brother-in-law and executor of his estate, that the circa 1920 cottage was located at 1418½ Clouser Avenue, College Park. Kerouac and his mother had shared a two-room apartment at the back of the house from July 1957 until spring 1958. Bob Kealing soon discovered the cottage was still standing, but in a state of disrepair.

Kealing wrote a four-thousand-word article on his discovery of the cottage for the Orlando Sentinel newspaper in March 1997. After reading the article, local College Park bookshop owners and entrepreneurs, Marty and Jan Cummins, contacted Bob with the idea of establishing a nonprofit corporation that would buy the cottage, refurbish it, and establish it as a haven for up-and-coming writers and a unique tribute to the literary legacy of Jack Kerouac in Central Florida.

A group of local people banded together around the idea, the Kerouac Project of Orlando was born, and the hard work began. Much of this work was carried out by Marty and Jan Cummins who gave themselves tirelessly to establishing a solid business organization, managing day-to-day operations, and raising funds for the fledgling nonprofit.

The first and most important order of business was to purchase the historic cottage before it was demolished. Local residents Grace and Fred Hagedorn, Summer Rodman, and Gale Petronis donated $10,000 for a down payment, and several weeks of tense negotiations began. With the help of local realtor Kathy Lightcap, the Kerouac Project succeeded in getting the cottage under contract to buy.

To close the deal on the property, $100,000 was needed—money the Kerouac Project did not have. But that changed when USA Today ran a brief article about the undertaking to buy and preserve the house in Orlando. Jeffrey Cole, Chairman and President of Cole National, read the article while flying from New York to Cleveland on business. He was a fan of Jack Kerouac and On The Road in his youth as an undergraduate at Harvard and an editor of the “Harvard Lampoon”. After reading the article, Jeffery called Marty Cummins to ask what he could do to help. Jeffrey Cole generously agreed to provide the balance of the money needed to purchase the cottage.

After some restoration and maintenance, the first writer-in-residence moved into the house for her three-month residency in the fall of 2000. Each writer is provided free lodging in the cottage, along with a food stipend so he or she can concentrate fully on their work. To date over 65 writers-in-residence from the United States and a number of other countries have spent time at the Kerouac House working on their projects.

In 2013, the Kerouac House was listed on the National Register of Historic Places.

Since its founding, further grants from various organizations and individual donors have allowed the Kerouac Project to continue maintaining and restoring the house and pay off all debt. As well, the Kerouac Project owns an adjoining house, which is used as a rental property to provide ongoing income.

From its inception twenty years ago, the Jack Kerouac Writers In Residence Project of Orlando, Inc. has been overseen and administered by a board of directors comprising of local people dedicated to seeing the mission and vision of the organization develop and move forward. The current fifteen-member board of directors is comprised of people involved in a number of local literary initiatives throughout Central Florida. Click for more information on the current board of directors.

Over the years, the work of the Kerouac Project has been reported on by USA Today, the Los Angeles Times, Boston Globe, CNN, Orlando Sentinel, National Public Radio, Writer magazine and other media outlets from around the world. As well, a number of visitors have made their way to Orlando to visit the Kerouac House, among them the late actor and musician Steve Allen, David Amram, Jack Kerouac’s friend and musical collaborator, San Francisco’s poet laureate and owner of City Lights Bookshop, Lawrence Ferlinghetti, historian Douglas Brinkley, noted actor and author Michael York, and Carolyn Cassady, widow of Kerouac’s traveling partner Neal Cassady. And regular fans of Jack Kerouac and the Beats continue to visit the house. With this notoriety has come an ever-increasing number of writers applying to be one of the four writers-in-residence chosen each year.